Skip to content
Accueil » Films » Call me by your name 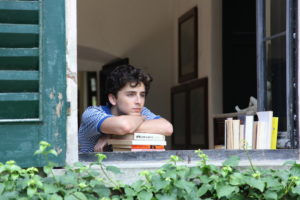 How important are all the nominations and awards in terms of bringing attention to a film like Call Me By Your Name?
Armie: All the awards attention is certainly unexpected. We didn’t make this tiny little movie in the Italian countryside thinking we’d still be talking about it a year after we first started to promote it. I think the awards talk and all of the love for the film is important because people should see this movie. I think it’s a valuable piece of art and it’s a wonderful thing in a world that seems increasingly scary to have a film that celebrates love.

Timothée: There’s no design to this. We all wanted to make a movie with [director] Luca Guadagnino first and foremost and to stay as faithful as possible to a book that already had a lot of fans. It seemed like a fantastic acting experience and one to learn from so the reaction to it has been insane and gratifying. We’ve been asked, “Do you think the reactions will hold over the next couple of years?” and the honest answer is that we haven’t even thought about that because the reaction over the last year and a half has been so overwhelming and tremendously gratifying.

How would you sum up the universal themes of the story?

Timothée: That love is love is love, that self-acceptance is a strong motivator in life and, as Michael Stuhlbarg’s character Mr Perlman says at the end of the movie, that suffering is suffering and any shape or form suffering takes is an acceptable form. The only thing about suffering that’s unacceptable is to hate yourself for it or to beat yourself up for it or to try and extinguish it unnaturally. Live with the pain that comes with love and live with the pain that is inherent in life.

From the feedback you’ve had, why do you feel the film has resonated so much within the LGBT+ community?
Armie: One of the best things I’ve come across is that someone on social media posted, “I watched your film, I went home and I came out to my parents”. I don’t know that I’m necessarily naïve enough to think that film can change the world but it definitely changed that guy’s world. We made a film about self-acceptance and a celebration of love and, to borrow a direct line from the movie, is it better to speak or to die? He chose to speak and that’s a beautiful thing.

Timothée: Our producer Peter Spears just sent this to me [quoting from a social media post]: “I came out to my mum about a year ago and I always felt she didn’t accept it 100% and I felt like me talking about my sexuality made her uncomfortable. When we watched Call Me By Your Nametogether god, it was really magical to me. I asked what she thought and she was like ‘It was beautiful, really beautiful’ and she talked and talked and hearing her talk about the movie made me so happy. I really felt like we became so much closer thanks to Call Me By Your Name. This film means so much to me and now I feel much more secure about talking about my sexuality with her. I know she’ll support me no matter what. I love this movie so much I’m crying.” When you read stuff like that it really gives me goosebumps. It makes me want to pinch myself because that’s really the dream as an artist. When you’re young you have those really formative artists and for me it was the musician Kid Cudi, maybe not to the degree in the passage I’ve just read but it was like a mirror of sorts.

Despite being set in 1980s, what do you feel makes it such a contemporary love story in terms of the sexual fluidity of Elio and Oliver?
Timothée: I wonder if it’s very now or if it goes back to the origin, when terms like heterosexual, homosexual or bisexual were exactly that – terms and definitions. One of the beautiful themes of this movie is how definition-less the love is presented and how sexuality isn’t presented as something that needs to be boxed but rather boys can be with girls, boys can be with boys, girls can be with girls. 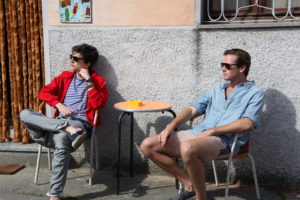 Looking back, what is the most memorable thing about making the movie?

Timothée: It’s similar to the tone that Luca’s movies take, where nature bleeds into life and life bleeds into nature. My most favourite memories are just the setting and being immersed in that setting, driving to work one day past Armie, who was riding there on his bike. I loved getting to know the town really well too and the house we were shooting in. On most projects people have trailers but on this one we had a green room and what a gift it was to get to discuss the day and future scenes with Armie or Michael and getting to pick his brains or chatting with Amira Casar [Annella] or Esther Garrel [Marzia].

Armie: The whole thing has just congealed into one perfect memory that is built up of leisurely but challenging days at work, terrific meals, amazing company, the beautiful countryside, the incredible town we were in, the majestic villa, time with Luca, time with Timmy, time with the cast… It’s all become one terrific memory that to pick just one favourite thing would be impossible.

The film has a profound effect on everyone who sees it. What effect did making it have on you as actors and as men?
Armie: It made me a lot more open and confident with my decision, and it helped me understand my decision, that I wanted to live the lifestyle of an artist. Just being an actor isn’t enough. This film was art for the sake of making art. There are a lot of conversations you have when you’re starting out as an actor, sitting in small theatres in dingy-lit spaces with other actors around you who are all so hungry for it, sitting in front of a teacher who is talking to you about the idealised experience of what making a movie can be and how it will push you, how you will grow, how your perspectives will shift. This what that experience to a T. It took me back to that, wanting to be challenged and wanting to participate in things that took me somewhat out of my comfort zone because any sort of discomfort is growth.

Timothée: I feel like I came of age as an actor on this movie, seeing the way that Armie and Michael worked – it really brought to mind the idea that it’s a marathon, not a sprint. Being younger the instinct is to be going at 4,000 mph at all times but I saw the value in pace and timing and that if you’re one of the principal characters in a film a lot rests on the moments between moments, not simply what helps move the story forward.

How did shooting in chronological order help with your performances, especially with Elio’s final scene?
Timothée: It’s precisely because we shot in chronological order that I was able to do that scene. I had a real feeling of nostalgia because the film was coming to an end, Michael had wrapped his final scene just before and I got to play out what I was feeling – a desire to keep working, which felt like an apt allegory for Elio’s desire to still be with Oliver.

Armie: It was almost like cheating. Instead of needing to have notecards that said, ‘Where have I come from, what have I been through, where am I now?’ we got to organically allow the characters’ relationships to grow within the scenes. We’d do a scene where we had our first kiss and then go immediately into the scene right after having just lived that experience instead of trying to fabricate in our heads what it would have been like and felt like. It made it feel easy, in a way, like there was less work for you to do as an actor.

Do you feel the bond you formed on the film is something that will last forever? And how would you describe that bond?
Timothée: I hope so. [Laughs] He’s not getting rid of me.
Armie: It’s a funny thing to try and describe, like describing a friendship. We just get along and sometimes you do and sometimes you don’t.

Timothée: I feel that’s the best answer. With friends it’s hard to pinpoint that that thing or that experience or that moment brought us together, it’s more like some sort of vibe.

Armie: We went through a beautiful process together in terms of making this film. I feel like if we’d met under other circumstances we’d still be friends but this was a more intense way to realise, ‘Hey, I really like this guy’.

What did you learn from working with each other?

Timothée: Again, it’s the idea that it’s a marathon, not a sprint. I feel like just by way of experience Armie is so wise.
Armie: One of the qualities that makes Timmy such an incredible actor to watch and also such an amazing human being is the fact that there is an unguardedness to him. There’s an emotional vulnerability that most people decide to cover or bluff. That’s why as a performer you can watch him and feel like you’re in the exact same position because he keeps his emotions so close to the surface but his way of protecting himself is through communication. He’s very good at communicating what he’s feeling and those vulnerabilities. It’s a great thing to see an actor be so emotionally accessible.

Do you have any keepsakes from the set?

Timothée: I wanted to keep a lot of the clothing but unfortunately it belonged to the husband of our costume designer Giulia Piersanti – Marco Morabito, who was also one of our producers – and he wouldn’t have had anything to wear.
Armie: I stole full sets of wardrobe. I stole some shoes, some shorts… Well, I don’t know if it was stealing because I felt like they were mine.

Luca has talked about the idea of a sequel and in the novel Elio and Oliver are reunited 15 years later. Would you be up for revisiting the characters?
Armie: Absolutely. I’d be happy to do anything that involved getting to work with Luca and Timmy again.

Timothée: I’d operate a boom mic on a Luca movie.